THE FOLLOWING STORY IS FROM “THE HAYS OF HISTORY AND LEGEND”.
A DOCUMENTARY OF THE SCOTTISH CLAN HAY AS COMPILED BY LEW HAYS L.H.D.

‘According to legend, it all started with an ox-yoke and a falcon. Family tradition has kept the saga alive for more than a thousand years. It is the beginning of the story of ‘The HAYS of HISTORY and LEGEND.’

In that place now known as Demarkfield, just about a mile from a little village of Luncarty in Perthshire, Scotland, they remembered the heroics of a Scottish farmer and his two sons in the year 971 A.D., before recorded history was commonplace, but when it was quite common for stories to be passed down from clansmen to clansmen around the fires that warmed not only their bodies but their pride as well.

“The traditional story . . . concerns the Battle of Luncarty which is believed to have taken place in 971 A.D., but as it belongs to the oral tradition, this can be but a guess. The reigning sovereign was Kenneth III who, at the time of the event, was residing at Stirling.

“News came to him that the Danes had landed north of the River Esk in Angus and that they had pilaged, burned and murdered subjects, regardless of age or sex, and that they were now enroute to Perth. King Kenneth immediately set off, with his soldiers camping at Montcrieffe Hill on the way.

“The King and his followers engaged the Danes at Luncarty. A fierce battle developed, with no quarter being given by either side. The King commanded the center, with the wings being led by the Thane of Athol and the Prince of Cumbria. The Danes, noted for their ferocity, broke one of the wings of the Scots army, with the result that survivors began to retreat in confusion.

“A countryman and his two sons, ploughing (plowing) in a field nearby, saw this happen, and the father, commanding his sons to follow with their implements, snatched up an ox-yoke as a weapon and barred the way of the fleeing men. He and his two sons lead them back into battle and they fought so well that the tables were turned and the Danes were completely routed.

“The father was a man of great personal strength and stature and he was acclaimed by all for his sterling contribution to the victory. He was requested to accompany the King to Perth, and was taken there with honor, although he spoke modestly of his part in the affair.

“The King commanded that a falcon be let off from Kinnoull Hill and that as far as it flew, the land would belong to the hero and his sons. The bird flew to a stone in St. Madoes Parish, still known as the Hawks Stone. (It is now situated in a private garden.) This took in some of the best land in the Carse of Gowrie, so overnight the peasant had become a powerful man.

“The Chiefs of the Hays carry their coat-of-arms three bloodstained shields representing the father and his two sons, the falcon, the ox-yoke and the supporters, two peasants, representing the two sons. . . Many Hays believe the tradition implicitly, although no written proof is possible.’

“A most interesting aspect relating to the legend is the fact that in 1770 a Mr. Sandeman, who farmed at Denmarkfield, which is the farm now occupying the site of the Battle, decided to level some tumli (mounds of earth, especially ones marking the sites of ancient graves) to make a bleaching field. On proceeding, the bones of men and horses were found. A little distance off, beside a large stone, traditionally pointed out as the grave of a Danish King, a sword was uncovered. This would appear to prove that a battle had been fought, to say nothing of the name of the farm.”

In 1971 members of the Clan Hay Societies of Scotland, the United States, Canada, Australia, and other places throughout the world gathered in a field along the river Tay, a few miles up from Perth, to observe the 1,000 anniversary of the legendary Battle of Luncarty between the Scots and the Danes.’ 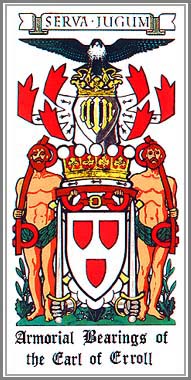